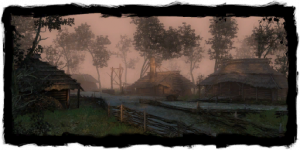 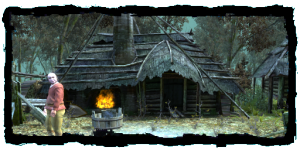 Le village des briquetiers est à peine un hameau. The handful of huts huddled together around the remains of the Ancienne route in the southeastern part of the marais, just north of l'embarcadère aren't much to look at. The brickmakers go about their daily routine, worshipping the Seigneurs de l'Eau and making bricks in the argilières southwest of the village. They do their best to avoid the many hazards of the swamp: the noyeurs, noyadés, bloedzuigers et ékinoppes. Sometimes kikimorrhes even dare enter the village, though those usually shy away from human civilization.

Vaska's hut is the center of the village, housing a shrine to the Water Lords as well as being her place of residence.

In the area immediately adjacent to the village, there are also two mysterious, ancient obélisques, assigned to Neh'tza and Maal'kad.

After the La récolte quest (but possibly anytime after the beginning of Act III), Geralt can find some interesting information from some of the brickmakers. One of the brickmakers praying inside Vaska's house mentions that "scouts from the Ordre" have been asking questions about the witcher's activities and intentions, specifically when it comes to dealing with non-humains.

Another brickmaker tells the witcher that Salamandre have been asking about him as well, even going so far as to try to torture the information out of the villagers. These villagers may be simple folk, but they are extremely principled in their customs. Not one of them succumbs to torture or gives away information about the witcher.